Role of Nitrogen in Citrus Production

Nitrogen is a key component of enzymes, vitamins, chlorophyll and other cell constituents, which are essential for crop growth and development. Therefore, nitrogen is one of the most important nutrients needed for high citrus crop yields.

Optimum N-response varies according to tree age. One year old trees usually require between 0.11-0.44lb N/tree. 0.88-1.43lb N/tree is used in years five and six. However, in years of maximum fruit production up to 2.2lb/tree can be applied to intensively grown orange crops. 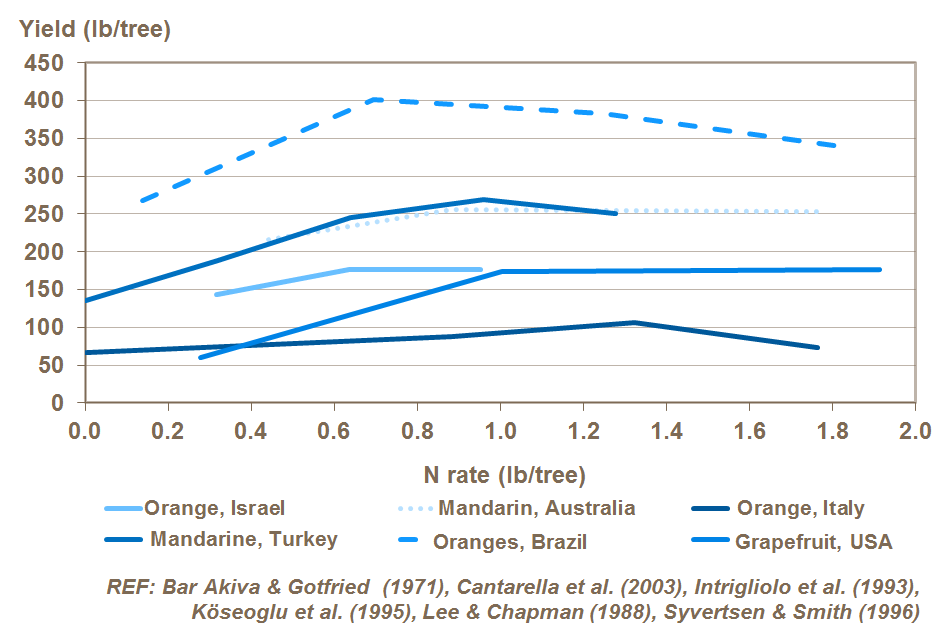 An annual program of fertilizer-N is needed to ensure long-term productivity by replenishing nitrogen, which is removed by harvested fruit. Much of this yield increase comes from increasing fruit number, but improvements in fruit weight have also been observed from use of nitrogen. 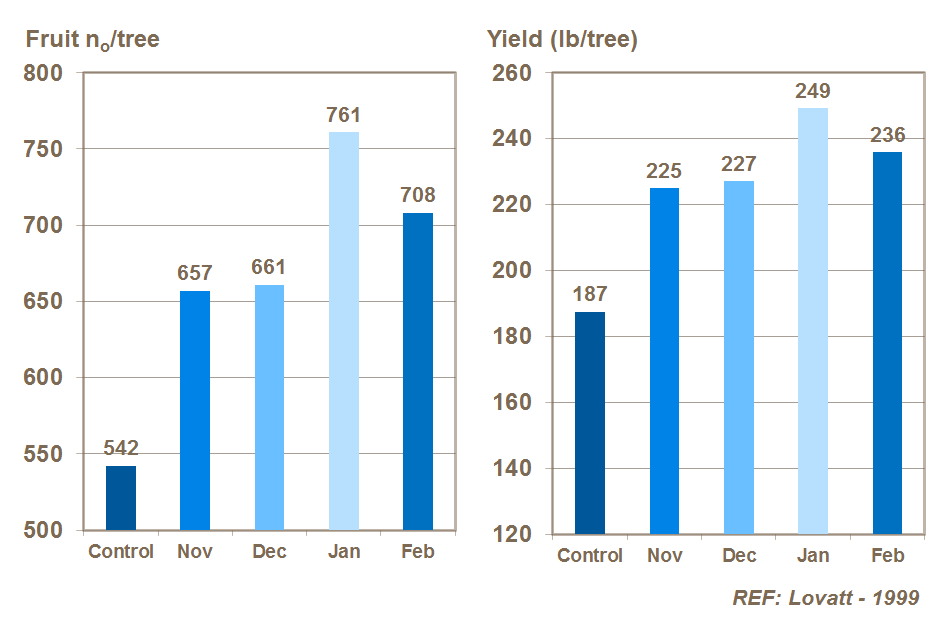 Citrus utilizes nitrogen mostly in the nitrate form although some ammonium is used, and the maximum uptake occurs from N-applications made during the periods of active growth. Also, highest yields have been recorded where nitrogen is applied as calcium nitrate rather than as ammonium nitrate (trials with Valencia Oranges in Brazil). 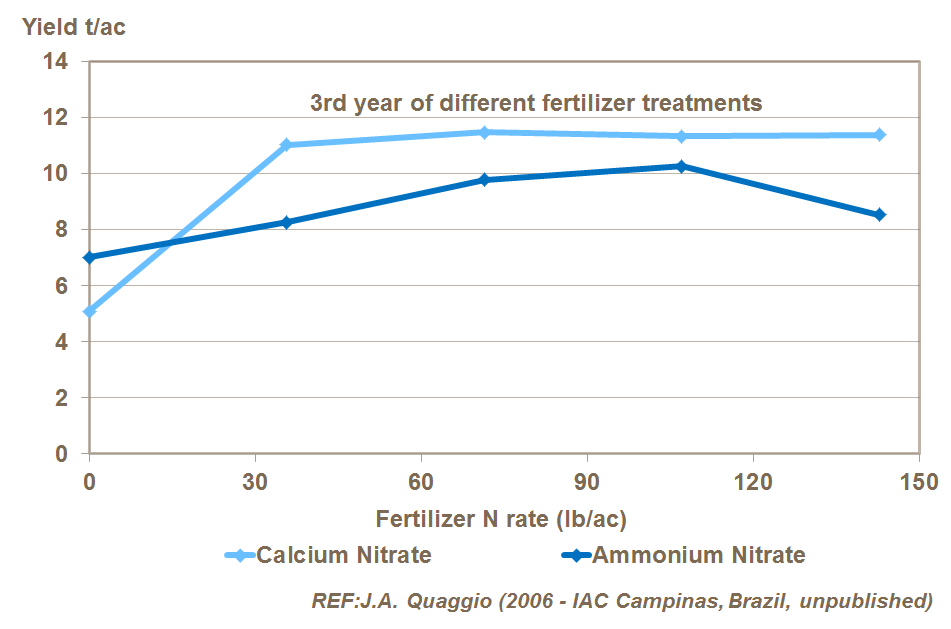 Correct use of irrigation ensures better utilization of nitrogen. Work on Valencia oranges in Florida, shows that an irrigated crop can use more nitrogen, increasing yields. 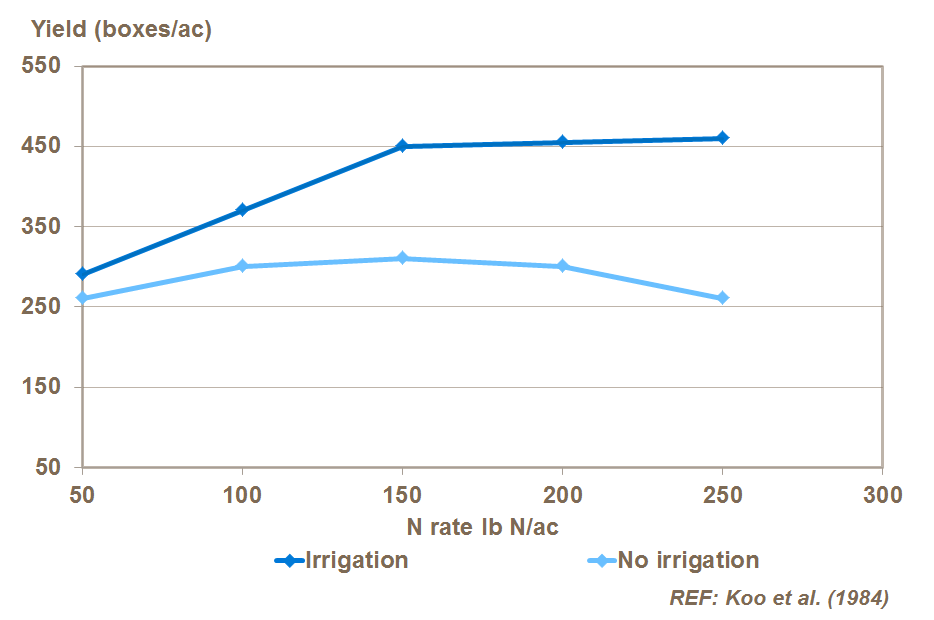 Over-use of nitrogen in an attempt to boost yields can be detrimental to fruit quality. Together with a slight effect on TSS content, high N can also reduce the TSS/Acid ratio. In addition, the ascorbic acid content of the fruit is also lower. 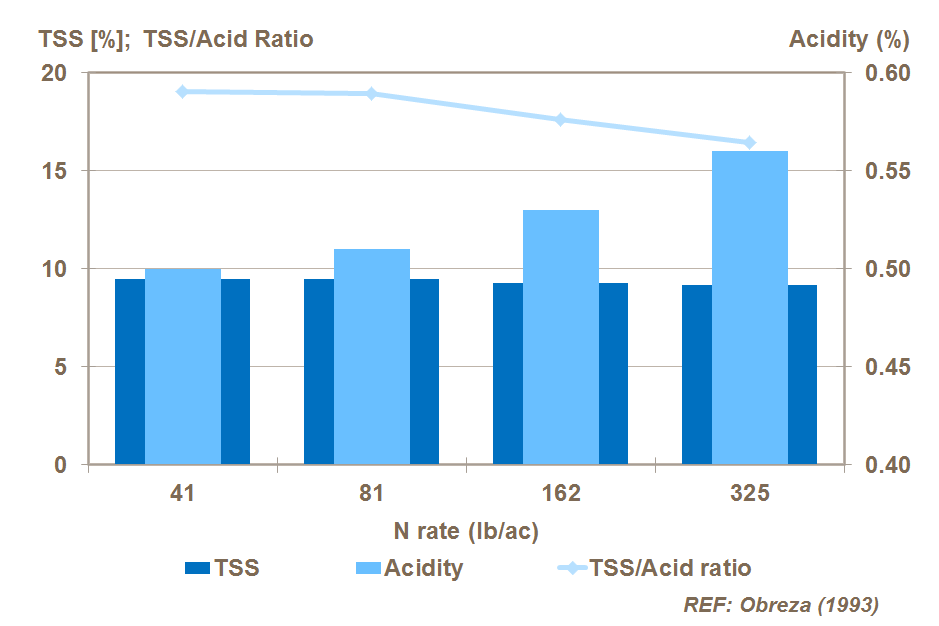 Crops with adequate levels of nitrogen have thicker peel and reduced risk of mechanical damage and disease incidence. Too much nitrogen can make the skin coarse, reduce the juice production and the size of the fruit.

Optimum N-response varies according to citrus tree age. An annual program of fertilizer-N is needed to ensure long-term productivity by replenishing nitrogen, which is removed by harvested fruit. Nitrogen is timed usually in 3-5 roughly equal split applications made during the citrus growing season and during periods of active root and tree/flower/fruit growth and uptake.

Read about the role of other nutrients in citrus production: